12. break up with your girlfriend, i’m bored

Ariana’s fifth studio album titled Thank U Next has been out for about two weeks now and is topping the Billboards. While I still have a sweet spot for her previous album Sweetener (seriously one of my favorite albums), this album is pretty amazing. This album has some nice bops to it and while Ariana definitely has had difficulties in the last few months, with her dealing with Mac Miller’s death and the break up with Pete Davidson, she still shines and puts out an amazing album. I love the songs on this album, Ariana can do no wrong in my eyes especially after dropping two albums in 6 months and both are on the Billboards and are major hits.

Here’s a snippet of Ariana’s interview with Billboard

“ Thank U, Next was mostly written in a week, with the people she’s toasting in the control room, and recorded in two weeks. Now comes the polishing phase and the addition of some tracks with Martin and his team. It was the product of a lot of “feminine energy and champagne and music and laughter and crying. This [album’s] not particularly uplifting,” she says. “A lot of it sounds really upbeat, but it’s actually a super sad chapter.”

“The music is defiant — deep, bass-driven bangers with trap beats alternating with airy, sad ballads — and aesthetically more adventurous than anything she has ever released. Some of the lyrics are so unambiguously personal and gutting that even if the singer were up for talking about them, most questions would be redundant “. 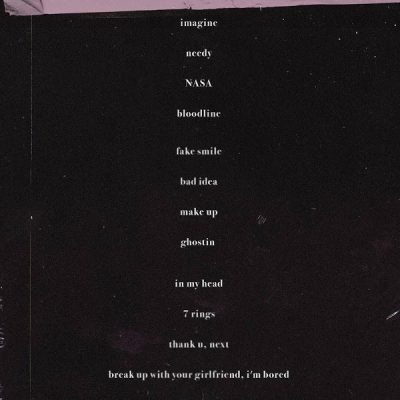 Thanks for reading ! xoxo