Summary (from Rotten Tomatoes): Determined to keep Annabelle from wreaking more havoc, demonologists Ed and Lorraine Warren bring the possessed doll to the locked artifacts room in their home, placing her “safely” behind sacred glass and enlisting a priest’s holy blessing. But an unholy night of horror awaits as Annabelle awakens the evil spirits in the room, who all set their sights on a new target — the Warrens’ ten-year-old daughter, Judy, and her friends.

While Marvel’s Cinematic Universe is my absolute favorite franchise, The Conjuring Universe is probably my second favorite; The Conjuring Universe, just like the MCU does a great job connecting the films. The Conjuring is the first film to launch the Universe, and Annabelle Comes Home is the latest film to be released of the franchise. The cases of the Warrens, the stories, and the Warrens themselves are so interesting and no doubt a crucial part of the franchise. Annabelle Comes Home, is the third film of the Annabelle sequels, and after watching this, you question whether this would be the last Annabelle film of the series ? I hope not, I like seeing this doll lol. When the movie comes on the first thing we see is the face of Annabelle, a scene which is familiar from another scene in The Conjuring Universe. I love the dynamic between Vera Farmiga and Patrick Wilson as the Warrens; They have this loving and supporting relationship who takes on these cases, that are quite interesting and scary, and through it all, they stay by each other’s side. I honestly think that Farmiga and Wilson are perfect as the Warrens. Most of the movie takes place in the Warren’s house, and wow let’s just say we get to witness some scary things in their house. I also liked how we were able to see demonic spirits we weren’t familiar with in the franchise. Speaking of demonic, we knew how evil and troublesome Annabelle was from the previous movies. In this film, you understand why she was locked in a glass case – Yes in this movie we are introduced to Annabelle powerful presence, which resulted in her being contained. I loved the acting, the chemistry amongst the cast, and their performances were great. Annabelle Comes Home is a great addition to the Conjuring Universe. This movie has the scares, the great acting, it’s terrifying, intense, and haunting. I recommend you see this film if you enjoy scary movies. So don’t forget, let me know in the comments below if you plan on or have seen Annabelle Comes Home. Thanks for reading ! 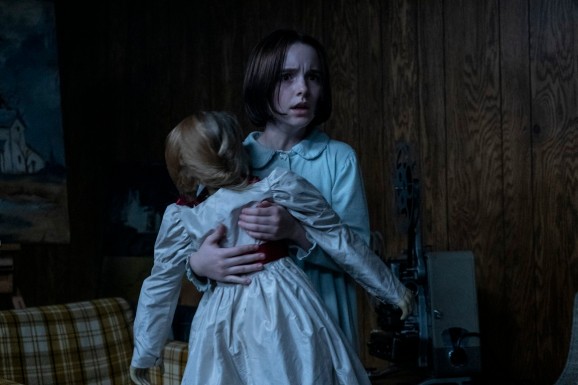